The Frances Thornton Memorial Galway Bay Swim is a charity swim event held in July each year. The swim traverses Galway Bay – a distance of approx 13 km.  The swim from Aughinish in Co. Clare to Blackrock Diving Tower in Salthill is one of the longest (and friendliest) open water swims in Ireland and is the only bay swim crossing on the Wild Atlantic Way.   All swimmers are asked to raise funds for our charity partner Cancer Care West.   It is run by a volunteer committee which includes members of the Thornton family.   A documentary video which captures the essence of the Galway Bay Swim and where the fundraising goes is available on YouTube:

Our swimmers have raised over €100,000 each year bringing the total raised to date to over €900,000. In that period the charity has launched several new services from Galway to Donegal. Expressing his appreciation to all the swimmers David O’Donnell of Cancer Care West said, “We are hugely grateful for the support and interest showed by all the swimmers in the work we do here at Cancer Care West”. The charity uses these funds to help meet the costs of residential and cancer support services, which are provided free of charge to cancer patients and their families. Find out more by visiting their website: www.cancercarewest.ie

Getting physically and mentally prepared for this type of swim is a huge challenge. The water temperature is approximately 15 degrees Celsius in July and the mental strength needed to overcome this is paramount. The weather conditions are unpredictable and totally out of the swimmer’s hands. They will simply do their best not to disturb passing seals while trying to avoid the jellyfish and passing vessels! Speaking about the event, organiser Kevin Thornton said: “The swim has seen its reputation as a serious challenge organised to a high standard grow leaps and bounds. We have seen interest explode with swimmers applying from all corners of Ireland. In recent years, we have swimmers from the UK, USA and Poland as well as Galway swimmers travelling home from as far afield as New York and Dubai to participate in the swim. We are proud of where we have gotten to with the swim and more importantly the funds we continue to raise to support the great work of Cancer Care West” 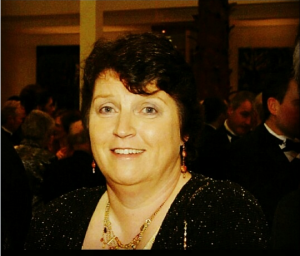 In 2006, two great friends, Kevin Thornton and Ronan Collins decided to swim the famous Galway Bay. Frances Thornton, Kevin’s mother, whilst apprehensive about the huge task, suggested that it could be an opportunity to raise some money for charity… A charity close to her heart. You see, Frances had cancer and her suggested charity was Cancer Care West. Kevin and Ronan agreed and so got busy training. Frances and Judy (Ronan’s mother) who both had a passion for the sea, for swimming, and for their children and so got busy organising things for their boys – permits for bucket collecting, bag packing in Dunnes stores, providing the lads with soups, sandwiches, drinks, bananas and Mars bars from O’Connors shop in Salthill. Frances and Judy left no stone unturned in support of that first swim on Sunday July 30th, 2006. The boys swam their hearts out and Fran and Judy were there to welcome them onto shore. Hugs all round. Fran was always a fan of a good hug! The post swim party was pretty good too! Without the help of the two mums, the lads would have struggled to make it across and so when the boys decided to go for round two in 2007, the ‘A team’ support crew was put in place, but this time they had 8 more mouths to feed. The swim was starting to grow! Again, Fran and Judy canvassed the shops and the streets, a few bottles of Lucozade here, a few Nature Valley bars there, a cheque here, a €50 note there… all in the name of the swim and for Cancer Care West. €3,000 raised in year one, €16,000 raised in year two, lots of happy swimmers, lots of money raised, lots of cancer patients helped and supported.

“All you can do is try your best and be happy doing it”… a favourite saying of hers. 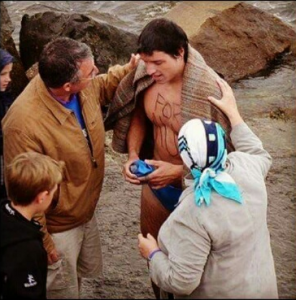 2007 was to be the last year that Frances would watch those happy swimmers arrive into Salthill and the last time she’d be there to hug Kevin and Ronan as they made their way up the Palmer’s Rock slipway. She died on April 21st 2008 and the swim was renamed after her. Since then, over 500 people have completed the Frances Thornton Memorial Galway Bay Swim, including Frances’s two daughters, Fiona and Claire. Fiona is a key member of the volunteer committee and is following in her mother’s footsteps, whilst Claire became the youngest swimmer to make the crossing at age 16. Kevin, Fiona and Claire’s dad, Brian Thornton is a huge driving force behind the fundraising and is a director of Cancer Care West. In 2015, Brian swam as a member of the Thornton family relay team. The event has now become the biggest annual fundraiser for Cancer Care West. That money goes towards supporting the many many patients and families that are suffering through cancer in the west of Ireland. Fran would be glad of that no doubt… and happy knowing that the hugs are still going around.